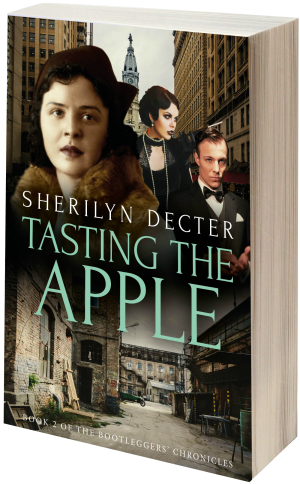 A young widow on the edge. A policeman back from the dead. Together, can they take down the city’s most notorious bootlegger?

Philadelphia, 1925. With a son to raise and boarders to feed, Maggie Barnes is at her wit’s end. But when a criminal element infiltrates the police force, the single mother puts her cares aside to help. As she tries to dig up dirt on bootlegger mastermind Mickey Duffey, Maggie realizes she can’t take on the case alone…

Inspector Frank Geyer used to patrol the streets of Philadelphia before Maggie was born. As he attempts to clean up crime from beyond the grave, the spirit uses his Victorian sensibilities to fight back against lawbreakers. But with corruption throughout the police force, can the phantom informant save his city and Maggie’s livelihood?

With the roof leaking and the lawlessness spiraling, Maggie and Frank have one chance to take down a criminal and prevent the unthinkable…

TASTING THE APPLE is the second thrilling book in The Bootleggers’ Chronicles historical mystery series. If you like strong female characters, stories inspired by actual history, and a touch of the paranormal, then you’ll love Sherilyn Decter’s tale of temptation and corruption.

Buy TASTING THE APPLE to experience the dark side of the Roaring Twenties today!

Innocence Lost is the first novel in the Bootleggers’ Chronicles, a series of historical fiction tales. If you like headstrong heroines, Prohibition-era criminal underworlds, and a touch of the paranormal, then you’ll love Sherilyn Decter’s gripping tale.

Check out TASTING THE APPLE on bookfunnel and the Media Page on the author’s website.

The Roaring Twenties and Prohibition were a fantasy land, coming right after the horrors and social upheaval of World War I. Even a century later, it all seems so exotic.

Women got the vote, started working outside the home, and (horrors!) smoked and drank in public places. They even went on unchaperoned dates (gasp)! Corsets were thrown into the back of the closets, and shoes were discovered to be an addictive fashion accessory after hemlines started to rise. And thanks to Prohibition, suddenly it was fashionable to break the law. The music was made in America- ragtime, delta blues, and of course jazz. Cocktails were created to hide the taste of the bathtub gin. Flappers were dancing, beads and fringes flying. Fedoras were tipped. And everyone was riding around in automobiles (aka struggle buggies and I leave it to your imagination why- wink.)

Bootleggers’ Chronicles grew out of that fascination. Writing as Sherilyn Decter, I will eventually have a series of historical crime fiction novels dealing with the bootleggers, gangsters, flappers, and general lawlessness that defined Prohibition. The Bootlegger blog rose out of all the research that I’ve been doing about this incredible era.

Growing up on the prairies and living next to the ocean, I am a creature of endless horizons. Writing allows me to discover what’s just over the next one. My husband and I have three amazing daughters, a spoiled grandson, and two bad dogs.

Sherilyn Decter is enthralled with the flashing flappers and dangerous bootleggers from the Roaring Twenties and Prohibition. Through meticulous research, that lawless era is brought to life. Living in a century-old house, maybe the creaking pipes whisper stories in her ear. To get the inside skinny on the Bootlegger’s Chronicles, you can reach Sherilyn at the following links:

The blog tour for TASTING THE APPLE by Sherilyn Decter, a Literature Historical Women’s Crime Fiction novel, has ended. This tour ran from March 25th through March 29th, 2019. Posts l consisted of reviews, guest posts, interviews, and excerpts. There will also be a tour giveaway, which Linda Romer won.