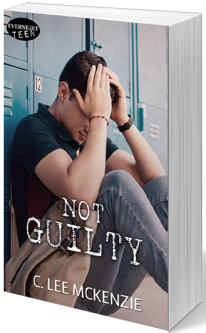 A blood-smeared knife. One young man’s word against another. A lifetime dream crushed.
The evidence points to Devon Carlyle. He was there when it happened. Everyone knows he had it in for Renzo Costa. And Costa says Devon was the one. In the judge’s rap of a gavel, Devon’s found guilty of assault. The star of the Oceanside High’s basketball team loses his shot at the one thing he’s worked so hard for—the championship game where college scouts could see how good he is.
Now he makes his great shots in Juvenile Hall with kids far different from those that have always been in his life.
Angry? Hell, yes.
He’s bent on finding who did the crime. He’s bent on making them pay because he’s Not Guilty.
But can he prove it?

A blog tour for Not Guilty by C. Lee McKenzie, a young readers’ adventure is underway and will run from October 28th 1st to November 1st, 2019. Posts will consist of reviews, guest posts, interviews, and excerpts. There is also a tour-wide giveaway. The tour schedule is posted below and you can follow along daily with Lee on the various stops on her tour.

NOT GUILTY can be found on Kobo and on the following links:

C. Lee McKenzie has a background in Linguistics and Inter-Cultural Communication, but these days her greatest passion is writing for young readers. She has published five young adult novels: Sliding on the Edge, The Princess of Las Pulgas, Double Negative, and Sudden Secrets. Not Guilty is her most recent one.

Sometimes she likes to jump into the world of the fantastic and when she does, she writes for the middle-grade reader. Some Very Messy Medieval Magick is the third book in the time-travel adventures of Pete and Weasel, with Alligators Overhead and The Great Time Lock Disaster being the first two. Sign of the Green Dragon, a stand-alone, takes the reader into ancient Chinese dragon myths and a quest for treasure.
When she’s not writing she’s hiking or traveling or practicing yoga or asking a lot of questions about things she still doesn’t understand. You can connect her on Facebook, Twitter, Instagram and at her Website.
Other young adult books: Sliding on the Edge, Princess of Las Pulgas, Double Negative, Sudden Secrets